Based on the official pmx tutorial.

The non-equilibrium free energy calculation protocol performs a fast alchemical transition in the direction WT->Mut and back Mut->WT. The two equilibrium trajectories needed for the tutorial, one for Wild Type (WT) and another for the Mutated (Mut) protein (Isoleucine 10 to Alanine -I10A-), have already been generated and are included in this example. We will name WT as stateA and Mut as stateB. 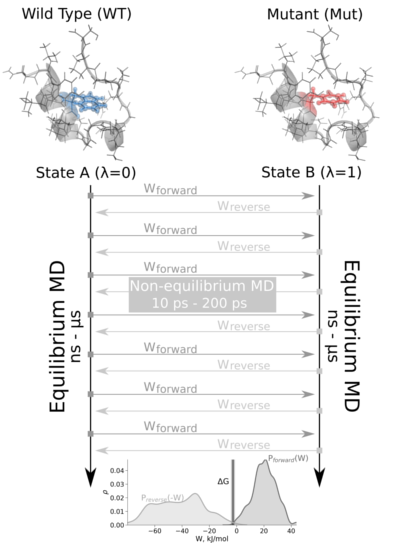 The tutorial calculates the free energy difference in the folded state of a protein. Starting from two 1ns-length independent equilibrium simulations (WT and mutant), snapshots are selected to start fast (50ps) transitions driving the system in the forward (WT to mutant) and reverse (mutant to WT) directions, and the work values required to perform these transitions are collected. With these values, Crooks Gaussian Intersection (CGI), Bennett Acceptance Ratio (BAR) and Jarzynski estimator methods are used to calculate the free energy difference between the two states.

Licensed under the Apache License 2.0, see the file LICENSE for details.

Advanced People list for this Workflow with search and filtering ...
Genís Bayarri

Organizations: The University of Manchester

BioExcel is the leading European Centre of Excellence for Computational Biomolecular Research. Established in 2015, the centre has grown into a major research and innovation hub for scientific computing. BioExcel develops some of the most popular applications for modelling and simulations of biomolecular systems. A broad range of additional pre-/post-processing tools are integrated with the core applications within user-friendly workflows and container solutions.

The software stack comes with ...

Advanced Teams list for this Workflow with search and filtering ...
BioBB Building Blocks

The BioExcel Building Blocks (biobb) software library is a collection of Python wrappers on top of popular biomolecular simulation tools. This library offers a layer of interoperability between the wrapped tools, which make them compatible and prepared to be directly interconnected to build complex biomolecular workflows. The building blocks can be used in many different workflow systems, including Galaxy, CWL, Jupyter Notebook and PyCOMPSs – notably their ...

Advanced Collections list for this Workflow with search and filtering ...
Tutorials for BioExcel Building Blocks (BioBB)